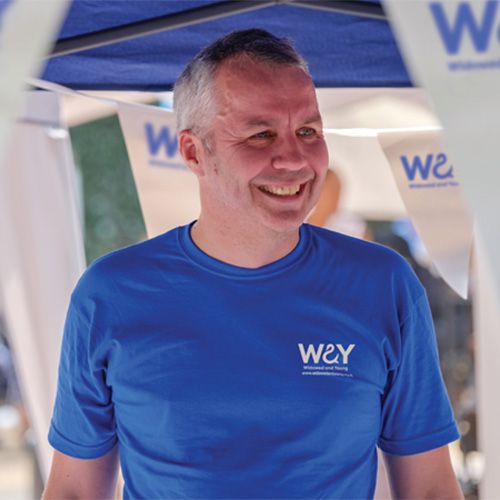 I was widowed in October 2011. In March 2009 my wife Heather started getting symptoms that were originally diagnosed as IBS, Crohn’s disease and appendix problems but a few weeks after we got married in August 2009 we found out she had stage 4 bowel cancer.

Heather was 33 when she was diagnosed and she died two years later, aged just 35. I was 38.

What was the impact of your bereavement?

Even though I knew Heather only had two years from diagnosis, it still came as a massive shock when she died. For the first few weeks there was all the paperwork and admin that goes together with losing someone, but after that the realisation she’d gone really kicked in. Almost nine years in, I still tell her I love her every day – and although the initial pain has dulled somewhat, I still miss her like crazy.

How has WAY helped you?

It took me a couple of years to join WAY after losing Heather as I wasn’t sure the charity was for me when I first looked into it. Instead I became involved with bowel cancer charities as a way of trying to work my way through the previous two years of madness and my grief.

After finally joining WAY at the beginning of 2014, I quickly wished I had joined earlier. The sheer power of joining a group of people who just get it is incredible – those who know the true reality of losing the person who you expected to spend the rest of your life with.

I guess the stereotype of a widow/er is a room full of people moping and wearing black but instead meeting with fellow WAYers allows you the permission to laugh again and share tears together. Joining WAY has definitely made my grief less isolating.

What is the best thing about WAY?

I think one of the best things about WAY is the group events and so I’ve been on quite a few and arranged some too – meeting up with others in the same boat, even though everyone’s grief is individual and different, is a powerful thing.

Talking of boats, I’ve helped organise a team for Dragon Boat racing along the Thames for the last few years and we’ve been lucky enough to raise thousands for WAY by doing so. Read more…

I think though the best events are those talking about how rubbish grief can be, a drink or two and a boogie around the dance floor. Grief can be the worst thing, but getting together with fellow widows can be a powerful thing.

Describe your role as a WAY volunteer?

In the past I’ve been on the WAY board as a trustee but now I mainly volunteer as an admin for a WAY subgroup for those members who’ve been widowed young without children, more commonly known as WAYWOC. It’s a very easy role to be honest as everyone within the group is lovely.

I also help admin a local group for WAYWOCs in the Midlands to help organise local events, take pictures for WAY at the AGM and wherever possible I’m often thinking of ideas to fundraise for WAY. I’m hoping to walk over 330 miles for WAY during 2020/21 by taking part in a number of challenge walks – more details here https://bit.ly/edwalks2020

How would life be different without WAY?

I’m not sure I’d have survived the last 8+ years had it not been for other WAY members reassuring me that I was doing OK. Life is easier now than when I was first widowed. The waves of grief are definitely shallower now and less often. But I still miss my wife. I miss her smile. I miss the way she understood me like no one else. I still have bad days but it’s good to know WAY has my back when I do.

I owe a lot to WAY and the friends I’ve met through the charity. It is worth so much more than the £25 annual fee.

What would you say to someone who was unsure about joining WAY?

Joining WAY has been the best decision I’ve made since being widowed and I would encourage anyone else who’s been widowed at a young age to join WAY, especially if you feel like the world doesn’t understand you right now or indeed that you don’t understand yourself. You can join in as little or as much as you like and be part of a big, caring family of people who just get it.