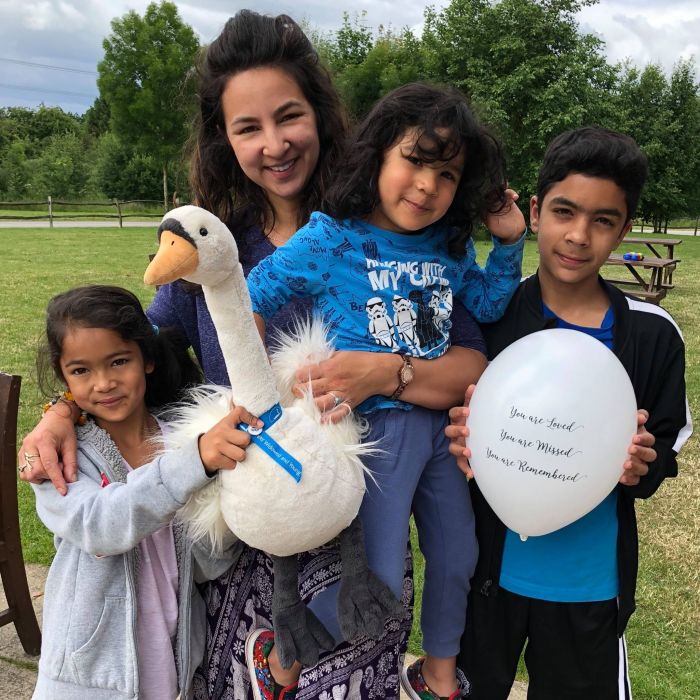 When were you widowed?

I was widowed on 24 December 2014. My husband Shazad was an art and design teacher and he was really tired but I put it down to the end of term exhaustion. He woke up suddenly with chest pains on 23 December and collapsed. It was very sudden. He had a massive heart attack and died later on Christmas Eve. He’d just turned 39 and I had just turned 31.

What was the impact of your bereavement on you and your family?

The most horrible thing I had to do was tell my three children their dad had died. There was a lot of confusion and questions from his family and friends. No one could believe it because it happened so suddenly. I was in a bit of a trance for the first few months. I was still breastfeeding my youngest one and he was clinging onto me the whole time.

The impact was huge financially because I was on maternity leave so I had to fill out all the forms, registering my husband’s death and getting things organised. His funeral was really quick – it was organised within a day. In Islam you’re buried quite soon so he was buried on Boxing Day.

When did you join WAY?

I found out about WAY from a health visitor. I’d never heard of WAY before but I joined about four months after my husband died. It just made me feel like there were lots of other people who knew what I was going through – I remember desperately trying to find other people with similar experiences to my own, with children of the same age. It was reassuring to know you’re not alone. Just letting off steam was really helpful.

I made quite a few friends online and went from there really. I used to chat with people when the kids had gone to sleep, which was really comforting.

How has going on WAY events helped you?

I went to my first event at Center Parcs about a year after I was bereaved and put some faces to names. I met some people who I’m still in touch with now. I’ve been involved in quite a few WAY events since then. The children loved it. They couldn’t believe there were so many children who had also lost their dads. It was reassuring for them.

The worst thing was coming home and going back to life, there was a big come down knowing that it’s only you to unload the car, unpack, get a food shop in, make sure kids are ready for school. It’s the little things like that really get to you.  I used to and still do message my WAY friends about how hard this is and they just totally get it. It’s been a really big help for the kids to continue going to meets – it’s the only time they feel normal. My eldest who is now a teenager has made friends with quite a few kids his age and they speak regularly, it’s really important for him.

How would life be different if you hadn't found WAY?

I think it would be quite isolating and it would have been different. When Shazad was alive, we used to go on lots of trips. WAY gave me a lot of confidence to go away on my own with my three kids. I think if I hadn’t joined WAY I wouldn’t have been so brave about going away. My grieving process would have been a lot more difficult.

How has life changed for you since you were widowed?

I feel more secure now and confident. It’s still demanding and tiring being a widowed mum, but I’ve grown more as person. I have learned not to be afraid to ask for help and to be open about how I’m feeling. There’s no specific process to grief, it’s very up and down. It's ok to one day feel immense anger and then feel blank and empty the next.

What would you say to someone who was unsure about joining WAY?

I’d say definitely join. You don’t have to join in with events at first, but you can read other people’s stories and you’ll find that there’s a community out there to support you, when you’re ready to take part.