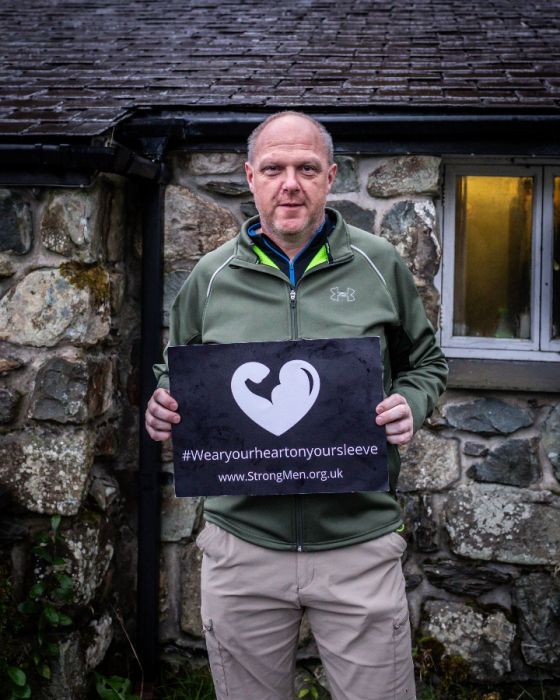 Yorkshire WAY member Andy Belt tells us how he found support and understanding by joining other bereaved men through the charity StrongMen.

"It does more harm than good to bottle everything up. I know that now."

When Andy Belt’s wife Gill was being treated for terminal cancer, she found out about WAY and suggested Andy should join. Andy signed up a few months after Gill died.

Living in an isolated rural community in Yorkshire with two teenage children (aged 13 and 16), Andy – who’s 49 – sometimes found it difficult to get to WAY meet ups. And often when he went along to events, he found it hard to open up.

“As a bloke I found it hard to speak about what I’m feeling,” he said. “I tried counselling at the hospice and it just wasn’t for me. It’s the stereotype of a stiff upper lip.”

So when Andy came across StrongMen on the Internet, he decided to give it a go. He wanted the chance to get together with other men who understood what he was going through. And he loves being outdoors in nature. So the opportunity to travel to Wales with a group of 30 men to climb Snowdon was just what the doctor ordered.

“I came across StrongMen after they’d done their first weekend away,” said Andy, who works in after sales for agricultural machinery. “I registered my interest and forgot about it. Then I got an email from Efrem to say I’d been chosen.”

A few weeks later, Andy was sitting in his car driving three hours from Yorkshire to Wales and he started to get cold feet.

“I very nearly didn’t go but I made myself keep going and felt really, really nervous.” But as soon as Andy arrived at the venue in Wales, he started to feel at ease.

“There were already quite a few blokes standing around talking,” he said. “By the end of the first night, we went up to the pub. I thought this is probably the best thing I’d ever done.”

The next morning, the 30-strong group of bereaved men – including Dan, Efrem and Ambassador Jeff Brazier, who lost his ex-partner Jade Goody to cervical cancer in 2009 – set off together up Snowdon.

“I started walking alongside people and everything came up,” he said. “The guys there had all lost somebody and had all been struggling with grief. We walked up Snowdon and chatted all the way there and all the way back. It was all lads together. It was really good to talk to people who understand.”

The next day, the group travelled to ZipWorld and built up a strong rapport enjoying outdoor activities. And the support has continued after the weekend was over. The group has created a WhatsApp group and keeps in regular contact with each other – helping each other to get through the highs and the lows of bereavement. A few of the men have been able to meet up since October.

“We all climbed a mountain both mentally and physically,” said Andy. “It does more harm than good to bottle everything up. I know that now. I think if I’d been more open on the weekend, I’d have got even more benefit. I’d like to have the chance to do it again.”

Find out more about StrongMen here...