Home / News / How cats are helping WAY members through their grief

How cats are helping WAY members through their grief

For National Pet Day (on 11 April), WAY member Stephen talks about how a cat called Jelly has helped him to get through the last year since his wife Ruth died of Covid…

So it turns out National Pet Day is the same day that my wife Ruth died of Covid last year. That means it is exactly 365 days since it has just been Angelica the cat – AKA Jelly – and she has been such a lifeline when my life was ripped apart.

Ruth died early on a Saturday morning, which was Easter Saturday. I don’t even remember Easter Sunday other than the second day that my “fur baby” needed feeding. It was the following morning that I woke to find Jelly curled up in a ball in Ruth’s chair. She didn’t want any food or drink. I thought I had lost her as well. I rushed her to the emergency vet, who explained that Jelly was grieving for Ruth. Needless to say, with a good amount of attention, Jelly moved forward accepting the death of Ruth in her own way.

Jelly is a rescue cat. Ruth got her nearly 13 years ago but couldn’t be certain of her age and this was before Ruth and I met. Ruth showed me the first picture she has of Jelly when she was the size of a TV remote control. My childhood was different, I had grown up in a dog household as my Dad is allergic to cats so I guess I was conditioned to be wary of them. Fast forward to when Ruth and I first met. I used to pick Jelly up at an arm’s distance. Jelly would bite me because I was coming in the way of her Mum and I guess Ruth wasn't giving her as much attention. So I think in the first few months it was a very love/hate relationship between Jelly and I. But Ruth was determined that I would love the cat.

Ruth and I didn’t really talk about death but on the few conversations when we did, I remember her saying I would look after the cat. She used to be so happy when Jelly would crawl up on my stomach to nestle herself in my beard. Ruth used to proclaim with the delight that you love each other and I had to admit that, yep, I had a soft spot for Jelly. I like to think that Ruth will be thinking that she won.

The other unusual thing with Jelly is – like her Mum, who was on dialysis when she died – Jelly has a small kidney and so requires special (very expensive) renal food and special medicine. I stuck with Ruth’s wishes and said, “whatever the cat requires, the cat will get”.

So, as other young widows from Covid will testify, not only did we face the death of our partners, we were also having to grieve through lockdown. And if you did not have children, which I don’t, you were completely alone – only being able to talk virtually with people.

If there was no TV or music on, the house would become eerily quiet, except for the faint ringing of the bell on Jelly’s collar. Thanks to Jelly, I didn’t feel so alone – and she is helping me to move forward in this new world after losing Ruth. Even just getting up to give Jelly food gave me a purpose and forced me to wake up, get my own breakfast and shower so then I could get on with my diploma in social work. I think between them, Jelly and the memory of Ruth have helped me to keep going and to graduate.

So Happy National Pet Day, Jelly. And thank you for keeping me company through this last lonely year without Ruth… 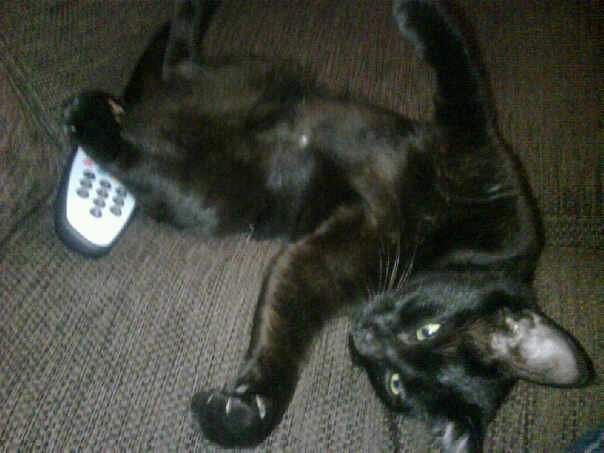 Jelly with the TV remote

Stephen is a member of WAY’s Facebook group for cat owners and cat lovers, which was set up by WAY trustee Kate last year.

Kate takes up the tale… (or should that be tail?)

Last year during lockdown, like many others in the UK, I found myself adopting a pet. Bella came to live with me after her owner died and a friend of mine had taken her and her siblings in off the street. I’d never been a cat person and when I first met my late husband Jonnie, I was cat sitting for my sister and brother-in-law. He’d had a cat since he was a toddler and set about teaching me how to understand cats’ behaviour and even how they like to be stroked.

I decided to set up a Facebook group last year as a way for WAY members who have, or simply love cats, to share photos and cat stories and also ask advice from other cat owners. As a new cat owner myself, it’s been a wealth of information and a lovely way to connect with other members too. It’s so hard when you are widowed as you become solely responsible for everything and, as a pet owner, that can be an extra worry.

Other members have told me the WAY cats group is their favourite WAY group and the photos of all the members’ cats help to make them smile on difficult days.

I now have three cats after taking in Bella’s sister Chloe, and a local stray that decided to move in after seeing the loving home (and food) provided for my other two, who’s been named Whistles. 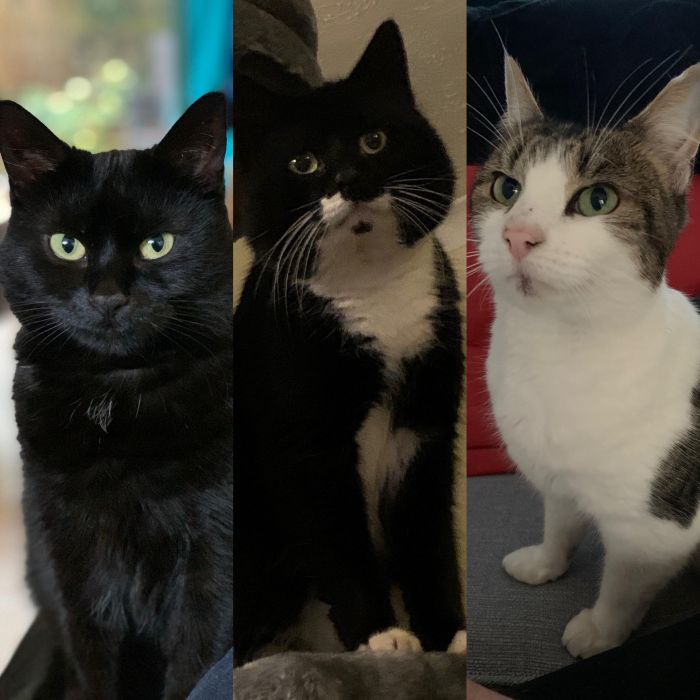