WAY member Andrew Ware from Cambridgeshire is getting set to cycle from Land’s End to John O’Groats to raise funds for WAY Widowed & Young.

Demonstrating the incredible power of WAY’s peer support network, Andrew will rely on the hospitality of some of the 2,600+ WAY members across the country – as he stays overnight with fellow widows and widowers en route between Cornwall and Scotland.

Andrew – who is the local area coordinator for WAY in Cambridgeshire – is due to set off from Land’s End on 29 July and plans to end up at the northern most tip of Scotland two weeks later, after around 1,000 miles of gruelling cycling.

Andrew hopes that his epic cycle ride will not just raise vital funds for WAY but will help to reach out to other young widows and widowers are sadly eligible to join WAY.

“I joined WAY in September 2014. The anniversary of Jane’s sudden death was approaching and, as many people in my situation would tell you, life was getting harder instead of easier. WAY has been a tremendous source of friendship and support to me,” he says. “It’s like an extended family, almost, and people are willing to go the extra mile to support each other.”

“Now that I am coping with this new life, and building a positive future for me and the children, I passionately want to support those people who sadly find themselves newly eligible to join WAY – the charity that has helped me to feel strong enough to carry on and look forward to the future.”

You can find out more about Andrew’s cycle ride on his blog, which he’ll be updating regularly along the way at https://1000moremiles.wordpress.com/. Please support Andrew by making a donation via his fundraising page.

This photo of Andrew and his family at Land’s End was taken the year before his wife Jane died. 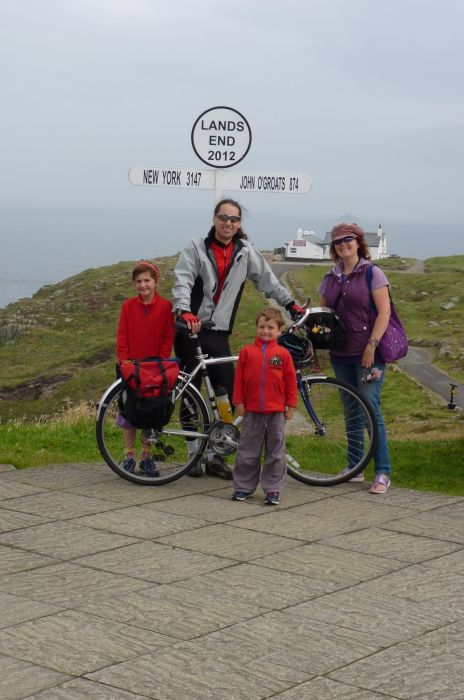