When Judith Burr’s husband Andy died last September, his best friend Steve Cavell was devastated. The pair were more like brothers than friends. For years, Steve and Andy have made a point of celebrating their birthdays together (on July 15 and 16 respectively). The collage shows some of the antics the pair got up to together and sums up their friendship perfectly, according to WAY member Judith!

This year, Steve decided to raise funds for WAY instead of receiving birthday gifts in memory of Andy. So far he’s raised a brilliant £700.

“I really wasn't looking forward to my birthday this year,” explained Steve. “Up until last year Andy and I had spent almost every birthday together for over a decade, either on holiday with our families or partying with our friends. Last year we were supposed to be together but Andy was taken in to hospital shortly before and it was right around this time we found out how poorly he really was.”

Why did you decide to support WAY?

“Rather than feeling sorry for myself I decided I wanted to try and do something positive in Andy’s memory and it was really important to me that anything I did would be something of which I was sure Andy would approve,” said Steve. “I knew that WAY had been a big help to Ju so I wanted to do something to say Thank You to WAY from both me and, in my mind, from Andy too.”

“I am really grateful to WAY for the support they've provided to Ju since Andy passed away,” he said. “I know how hard losing Andy was for me so I cannot begin to imagine what it must be like for Ju. She's been amazing though and I know WAY have been a big part of helping her cope with each day and the terrible ‘firsts’ throughout the year.”

How does a birthday fundraiser work?

“I’ve made it really clear to everyone that I don't want cards or presents this year, any money that would be spent on those things should go to WAY.  What’s been really lovely is that friends and colleagues who would never normally buy me a gift or send a card have seen the post on Facebook and donated to the JustGiving page.”

How did Judith react to Steve’s fundraiser?

She told us: “I was absolutely blown away when Steve contacted me to tell me his plan. I guess I have been so consumed with my own grief that I forgot other people were grieving for my husband as well as me. I was so touched that Steve chose to do this, even more so when I found out he wanted to do it for WAY. He has obviously realised how much WAY has helped me!”

“On a personal level, WAY has been an amazing lifeline for me,” she said. “In my darkest of hours, of which there have been many, it has always helped me. To be able to talk to people who just get it is such a help. There is always someone around to chat, you can post what you want without feeling judged. I also find reading posts from people further down this road helpful.  It helps to know that you can get to a point where you can live with your grief.

To anyone who has donated, I just want to say the biggest thank you from the bottom of my broken heart. To know you remember Andy, support Steve and in turn help me on this horrible journey means the world.”

Photo caption: Judith created the collage below of Andy and Steve celebrating past birthdays (Andy is wearing an England shirt in the photo bottom left, where they are larking about with limes). 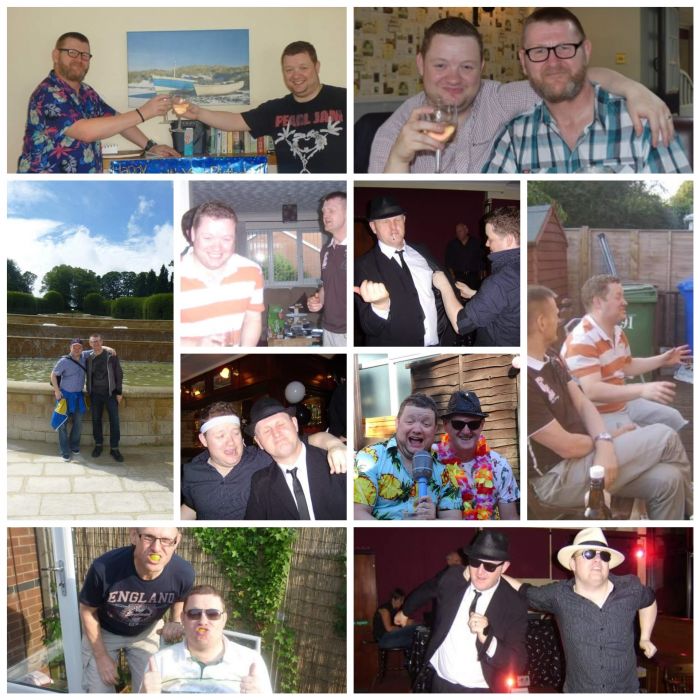