Over the past few months, we’ve been busy campaigning against cuts to bereavement support payments. WAY members have been interviewed in print, on the radio and on TV – with excellent articles appearing in The Guardian, the Independent and Grazia – to name just a few. WAY’s Chairman Georgia Elms was also interviewed on the BBC2 Victoria Derbyshire show alongside Life as a Widower blogger Ben Brooks-Dutton here and on ITV’s Good Morning Britain.

In spite of our best efforts, the new bereavement support payment system came into effect on 6 April – this means that new parents who’ve been widowed after 6 April will now only be eligible for support for 18 months, instead of for up to 20 years. But we are not going to give up the fight! Some of our members organised a protest at Westminster, which was covered in The Guardian. And WAY is working alongside the Childhood Bereavement Network and also as part of a high-profile new task force to improve support for bereaved widows and widowers. There’ll be more info on this soon.

It is fantastic that we have been able to galvanise the support of opposition MPs and a cross-party group in the House of Lords, who said they believed the government was making a mistake. 94% of MPs have received letters from WAY members and our supporters so far.

In the run up to the General Election, alongside our friends at the Childhood Bereavement Network, we are asking political parties to include commitments in their manifestos to:

- rethink the recent changes and consult on a fairer deal for families with longer term support for those with children; and
- extend entitlements to co-habiting (but unmarried) parents whose partner dies.

Please email your MP at this link to keep this profile high on the political agenda as the General Election approaches: https://ncb.eaction.org.uk/lobby/bereavementmanifestos

Thank you so much for your support & for helping us to stand up for bereaved families. 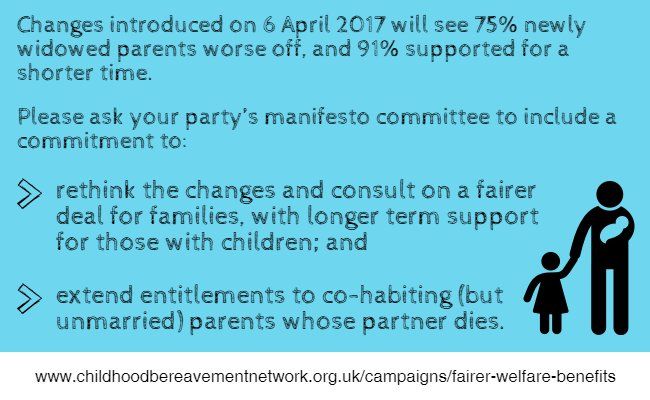