Finding Alice: A review of the new ITV drama about widowed life

To date, the number of TV dramas centring on the experience of someone widowed under the age of 50 can easily be counted on the fingers of one hand – ‘Afterlife’ on Netflix and ‘Sorry for your loss’ on Facebook Watch to name but two. As such, ‘Finding Alice’ appears to be the first to bring this subject to a mainstream channel in a primetime slot and for that alone, it should be applauded.

This first episode of six certainly makes a commendable stab at depicting the reality of the frustrations so often thrown at the young widow by society and conventions in the early days following the death (particularly a sudden one) of their partner. Alice’s empathy-free  encounters with officialdom are likely to ring true with many of us who have been left to deal with the inevitable bureaucratic jungle before our time. Still more may have experience of clueless and insensitive parents and over-attentive in-laws. Some, indeed, may also be powerless as we watch our teenage children stepping up to take the role of the adult while we regress into messy grief. In addition, Alice, played by Keeley Hawes, does not come across as the most sympathetic of characters on this introduction, but many widows are likely to be able to relate to her assertion that she didn’t really have friends, she just needed Harry.

While the often rapid juxtaposition of raw pain and grief with darkly comic touches may jar somewhat with the casual viewer, to the bereaved, it presents a pretty accurate picture of the relentless emotional rollercoaster of grief. Whether that was the aim of the producers or just a coincidental outcome is another question. Likewise, the slow, almost stagey pace of this opening episode can be justified in that it mirrors many widows’ experiences where it can feel like one is walking from day to day through treacle and different characters appear and disappear from one’s life as if in a play.

However, ‘Finding Alice’ is essentially a primetime ITV drama and, as such, all these relatable references are wrapped around what looks like it might become a ‘soapy’ and cliché-ridden plot surrounding the secrets and intrigue Harry left behind and which Alice will have to deal with as they emerge over the next five episodes. She may have already managed to uncover the mystery of the passcode to their ‘smart’ house to let in the light (as neatly illustrated), but will she uncover the mystery of who Harry really was? To the bereaved, this plot development is likely to take away from the credibility of the piece and those for whom this storyline may have parallels may find it too close to home and switch off.

It is worth considering who is ‘Finding Alice’ is aimed at. A large proportion of the audience for an ITV Sunday night drama will be non-widowed young. They are looking for entertainment and escapism which this plot will no doubt give them. If they, at the same time pick up a little understanding from Alice’s experiences, it just might mean that another widow is spared being told, “You’re so strong, you’ll get over it” or “You’re still young, you’ll meet someone else.”

ITV appear to be serious about bringing the issue of young widowhood into the open, hence the opening warning of distressing scenes and the inclusion of WAY contact details on the advice pages here. As a vehicle for getting people, widowed and not, talking about the subject, whatever their opinion of the production, the fact that it exists is what counts. 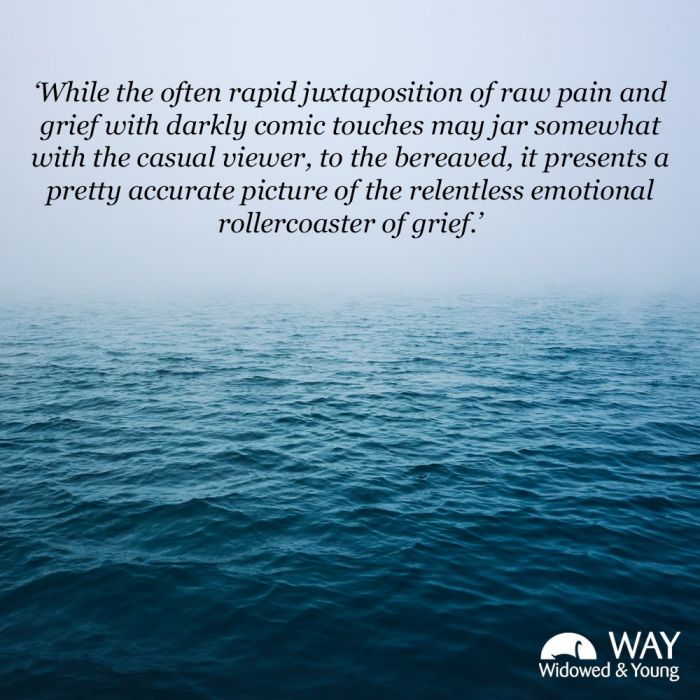