Home / News / Finding Alice: some words on widowhood from one of our members

Finding Alice: some words on widowhood from one of our members

This Sunday, a drama about sudden, young partner grief started on ITV1, Finding Alice. In anticipation of the series, one of our members, Jane*, wrote these incredibly moving words about what it feels like when your life partner vanishes without warning from your life…

"Everyone has a unique journey with grief, as complex as the relationship they lost, but I hope this drama helps to correct several widely held misconceptions by highlighting some of the following:

Grief has an agency, indomitable power and pace of its own, hauling its victim through an endless rollercoaster of physical, emotional and psychological symptoms over which we have very little control. For the first six months, it was like a physical illness which could floor me at any time.

It’s incomparable with and infinitely worse than splitting up, which involves a choice by one or both partners. The lack of control creates a much deeper anger and sense of panic than divorce did. I’ve been through both, so I can compare. The difference is choice, even if it was the choice of one rather than both partners. It felt very much like John had been kidnapped and I desperately needed to find him because I knew he didn’t want to split up and neither did I, ever. And that felt worth fighting for, but there was absolutely no chance of bringing him back. That was torture to accept.

All that we are on the day we lose our partner vanishes forever, in my case with no warning. Every friendship, every interest, pastime, all our attitudes and values, the ways in which we made sense of our past, and of course the planned future, are all up for review. Everyone we know reconfigures their perception of us and replans an ultimately different future with us. It’s dizzying because it happens all at once. Everyone from your life comes back.

Everything which was private and agreed verbally, built up and protected behind closed doors, in writing and even officially between us was up for very public debate, the stuff we’d bought together, finances, even on what we’d agreed in the case of one of us dying. It wasn’t possible to carry out all of his wishes and his voice was silenced, something I never expected. So many voices, so many different relationships with one man.

Many assumed that, because we weren’t married, it wasn’t as serious as losing my husband. Marriage is a piece of paper, which we were about to have printed off later that year anyway, but after 9 years of building a life together, I didn’t need a piece of paper to prove what a big deal our relationship was. I was shocked by how many people thought I hadn’t lost my husband or that I wasn’t a widow. I was married before I met John and felt much more “married” to John than I ever did to my ex husband.

Mental agility slows down to a terrifying low. I used to read three books a week and loads of articles for work. I realised quickly that I struggled to read even a couple of sentences on a form. Weirdly, I could still write. In the early weeks, I could only concentrate on kids’ cartoons, which helped to keep me sane. Peppa Pig was my favourite. In the context of feeling more ill than I’ve ever felt in my life, I had to administer his estate, dealing with around 40 different companies, banks, organisations etc. It was a living hell and I was treated very badly by the majority of the organisations I had to deal with. I collapsed in the bank, at the solicitor’s, in many public places.

A new relationship comes up for moral judgement from every corner. Even people I haven’t known for long at all have questioned how I can move on so quickly. I haven’t moved on, I’ve moved forward and I’m building something new and totally separate. It’s in a different department of my head. It’s still nascent and it feels brave because all that I’m building in my new relationship could be lost just as suddenly, after another 9 years or even longer. To use the analogy of snakes and ladders, my new relationship hasn’t taken me magically back to square 99, from which I fell back to square one two years ago. It’s more like square three and counting. Ultimately, it’s worth the risk because love and companionship underpins my best self. I don’t want to live alone. For me, it was an empty way to live. Everyone is different and some people love living alone. I don’t. I have so much to share. In no way has it stopped me from grieving or replaced what I had with John. It’s a new adventure.

What I really lost, which I’ve only realised recently, is the in between knowledge which John and I built up over the years. The silly names we made up for things (and people!), the silly private memories, ways of being and knowing and living which I couldn’t tell anyone because they only made sense in two brains, and now only in mine. Being unable to share these “knowings” makes me feel like it was all a dream, or that I made that relationship up because I can no longer do anything with our mutual understandings. They’re trapped in my head forever and I’ll have to carry them round forever. They no longer have a matching partner in John’s brain too, and that’s the saddest part of all this.

After a lot of therapy and GP visits, I now know that I’m experiencing what they call “complicated grief” and also PTSD for many reasons, not least the sudden trauma of losing him without warning, but also because I didn’t really have a family of my own to fall back on. I couldn’t move back home. My parents weren’t there for me at a time when I needed them more than ever in my life, the life they created. Somewhere along the line with John, I’d allowed our relationship to take the place of a family, and it became my only base, my whole world. When I lost John, I no longer felt rooted anywhere and that was terrifying. That’s probably why I couldn’t live alone.

It will be interesting to watch the series and to see if it highlights any of this. The more that can be done to raise the profile of young partner grief, the better. This country needs a crash course in grief.

Grief doesn’t have an end and I’ll never get over it. I’ve found better ways of carrying it and of living with a thoroughly wanted relationship that no longer has anywhere to go. Every day since it happened, I’ve found a moment to look up at the sky, privately and silently, and ask why. I honestly think I’ll do this forever. It helps…" 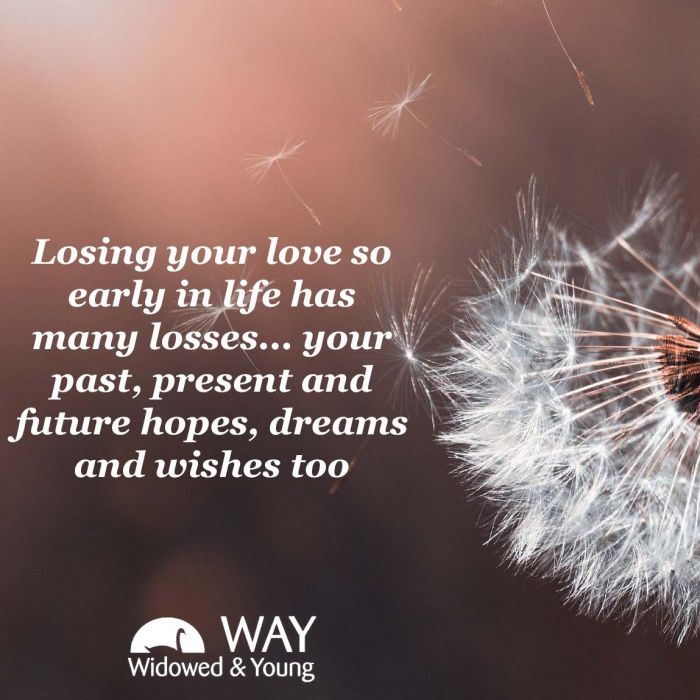