WAY Widowed and Young is absolutely thrilled that Year 9 students from Gordon’s School in Surrey were on the winning team that acted as advocates for our charity – winning £1,000 for WAY.

Pupils from Gordon’s School have been taking part in First Give, a philanthropy project that Year 9 students complete as part of their Personal, Social, Health and Economic (PSHE) lessons. The aim is to encourage young people to learn about the social issues that impact their community.

Fourteen-year-old Freddie, the son of Surrey WAY member TJ, gave a winning presentation along with his friends – and they persuaded the four judges to vote for WAY!

Freddie’s Mum TJ told us how proud she was when she found out about her son’s success:

“WAY has been a lifeline to me and my boys since their dad died nearly 10 years ago,” she said. “I’m so chuffed that my son got through to the final stage of the competition on his own steam – and without my knowledge! I’m sure that making friends with other WAY children has helped him deal with the loss of his dad.”

WAY trustee Joanna Sedley-Burke went along to hear Freddie’s presentation and to provide moral support to the team:

“I was so proud of Freddie and his friends,” she said. “They did a fantastic job – and they even raised nearly £70 for WAY by selling sweets and ice creams to students and staff. Every single penny will help us support more people who’ve been widowed at a young. We want to say a huge thank you to Freddie and his friends – and to all the Year 9s at Gordon’s School and everyone involved with the First Give event.”

Anna Hutchings, Head of PSHE at Gordon’s School, said: “I am extremely proud of the students who took part in this year’s First Give final. They put a lot of effort into researching their chosen charities and organising various fundraising activities. WAY’s trustee Joanna also spent a lot of time with the winning group and really supported them throughout this project, which made a real difference to the quality of their heartfelt presentation. I know how much the charity means to Freddie and his family and I hope the students will apply what they have learnt from First Give and continue to support and work with charities in making a difference to the lives of others.”

Below: WAY trustee Joanna Sedley-Burke (centre with sunglasses) with the winning team (wearing blue) from Gordon's School. Freddie is shown holding the cheque. 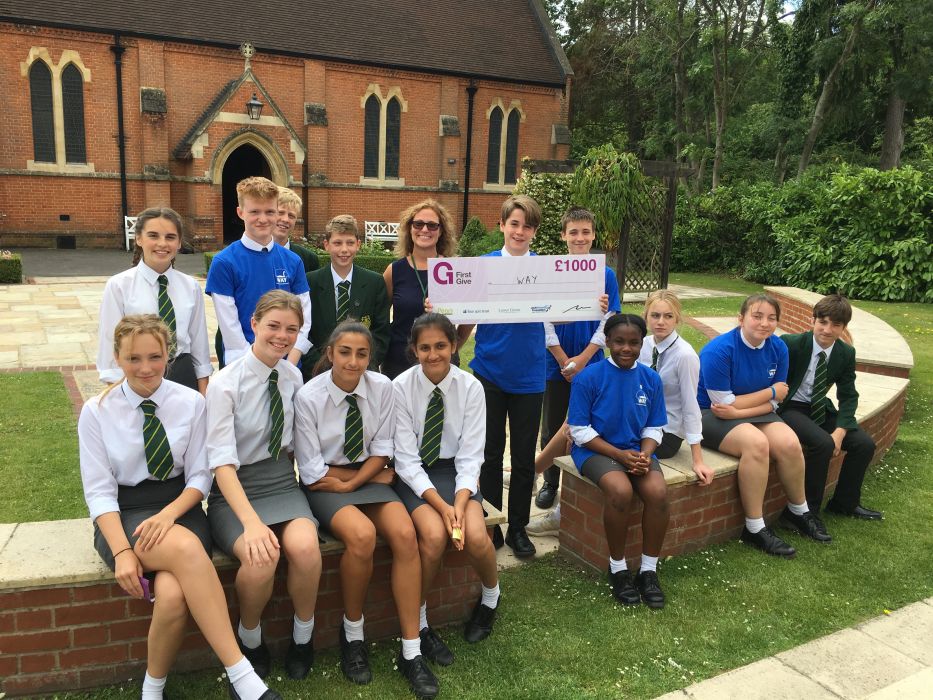